A Weekend Trip To The Painted Monasteries of Romania

Who knew these monasteries covered in religious murals were hiding in Romania? If you're planning to visit (and you should), here's everything you need to know about the monasteries of Bucovina.

Romania is one of those European countries that might not be on your travel list yet, but if you're anything like us, that will change once you see everything it has to offer. Want to know what's better than just visiting Romania? Spending an entire semester there as a volunteer at an orphanage with International Language Programs! Not only will you make a major difference in the lives of these special kids, but with plenty of days off, including every weekend, you'll have lots of time to visit stunning, lesser-known gems like this one.

Want to spend a semester volunteering in this beautiful country?
Learn More About ILP's Orphanage Program

While there are many functioning monasteries spread across all of Europe, this collection found in Bucovina is very distinctive, and really is a photographer's dream. If you have a free weekend while exploring this amazing country, make sure you check this place out!

All Of The Details You'll Need For Your Trip 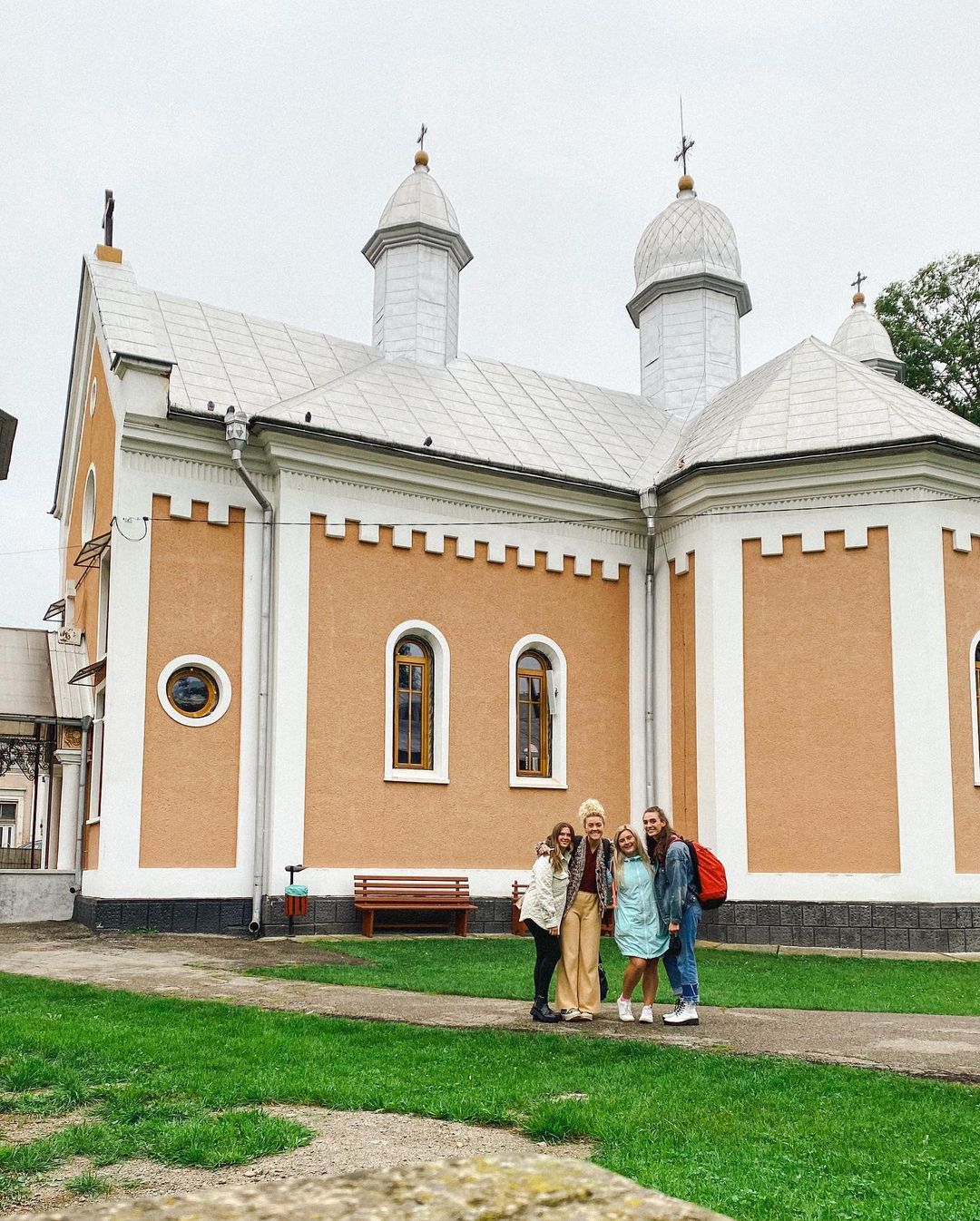 The structures themselves date back to the 1400's and 1500's, but are still sturdy and remain well preserved. Their most stunning features are the frescoes painted on both the interior and exterior walls. They depict classic religious scenes from the Bible and tell stories of Christ, well-known priests, and other events through history. This was a great way for the locals who could not read the stories themselves to still be able to familiarize themselves with the Bible and church history.

Here's a map with stars marking where each of these monasteries is located in northeastern Romania. Bucovina itself is about a 3-hour bus ride from where our volunteers are living in Iasi, making this an ideal weekend trip, since trying to cram all of these monasteries into one day may leave you feeling a little frantic. 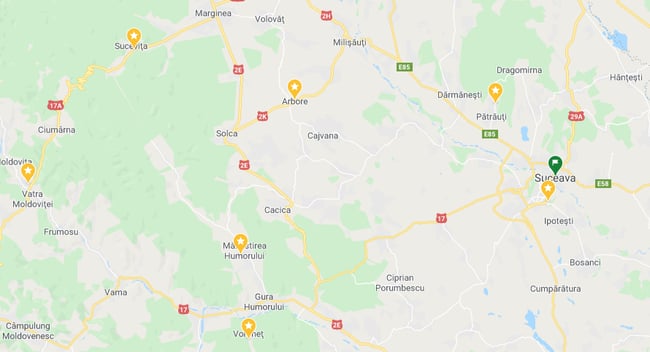 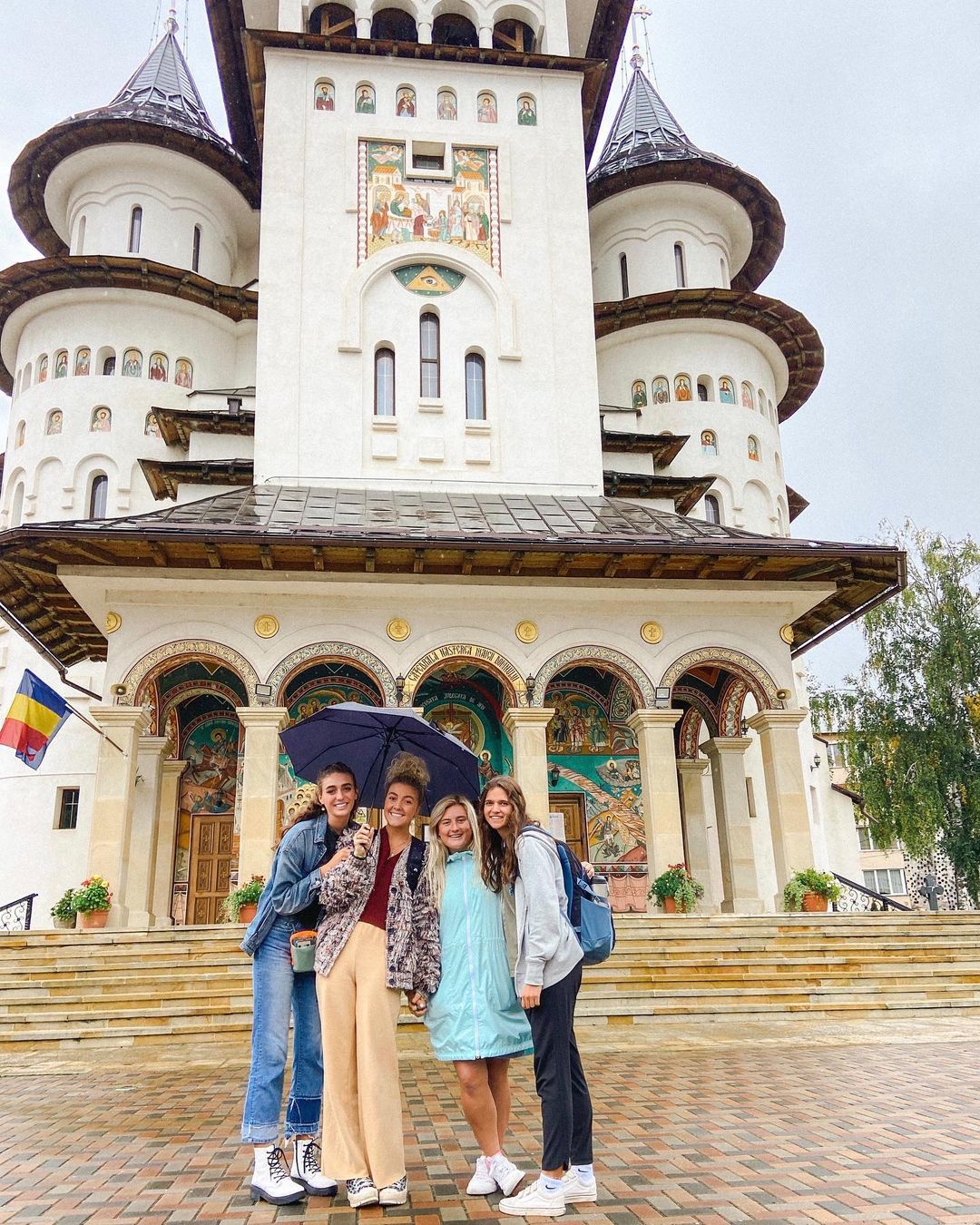 As shown on the map above, we're going to highlight several significant monasteries in this area. Starting with the green flag in Suceava and then going clockwise, let's briefly introduce you to each one! This website will also be very helpful when planning your trip.

Kept here are the remains of St. John the New, a Christian martyr who is believed to be the protector of Suceava. On the exterior of the church, you can still see remains of the frescoes featuring the stories of The Prodigal Son and The Hymn of the Dead. You will also love the burgundy mosaics covering the roof and large bell tower. See pictures here.

Near the town of Gura Humorului (about 30 miles east of Suceava), you'll find the "Sistine Chapel of the East." This is probably the most famous of the monasteries, and was built to celebrate a victory against the Turks in the late 1400s. The exterior frescoes are still quite vivid, and illustrate many scenes, including The Last Judgement. You'll see many apostles, angels, demons, martyrs, and even some philosophers on the walls. To this day, no one knows exactly what the long-lasting bright blue paint is composed of. 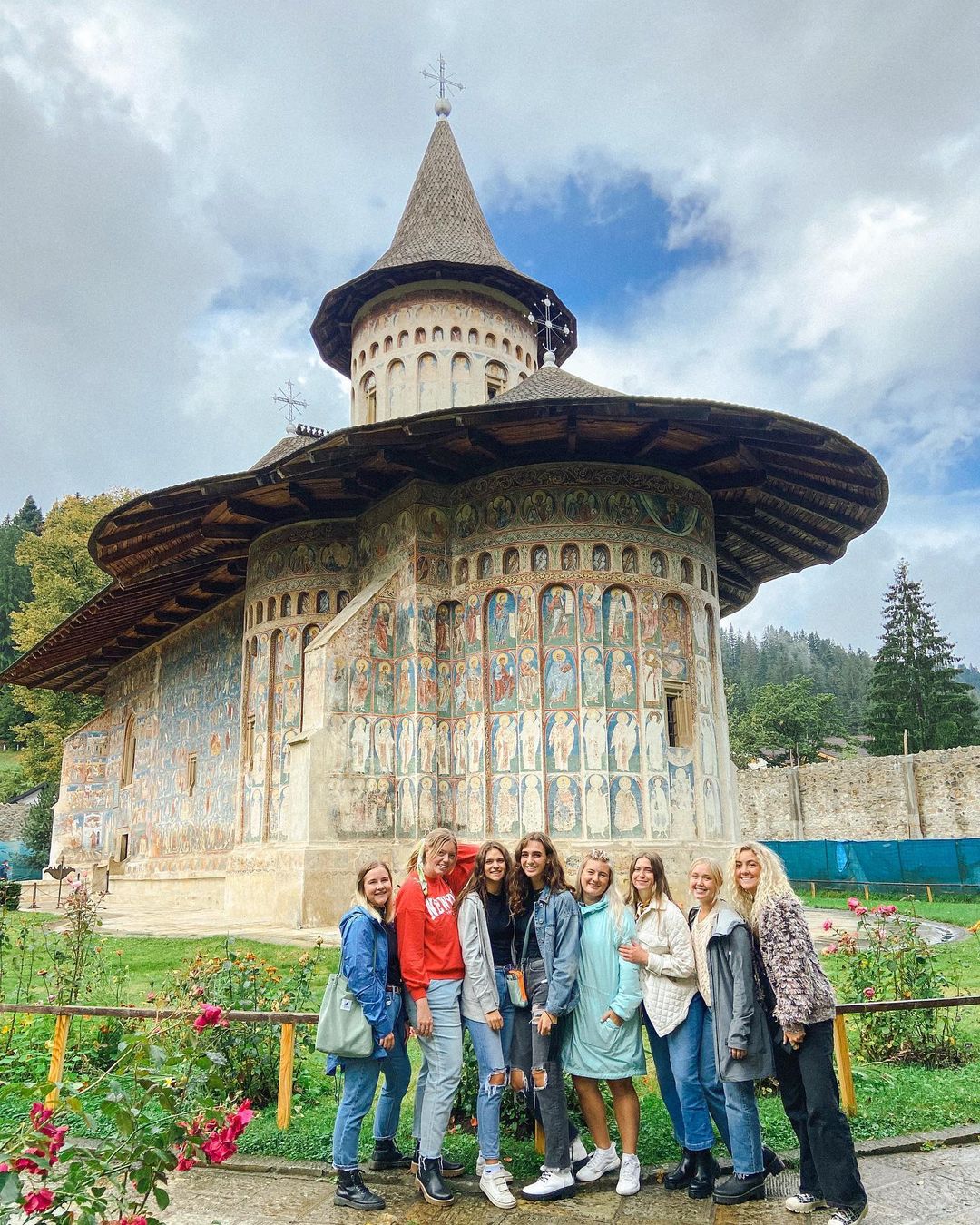 This church is rather smaller than the rest, but still worth visiting! The reds and browns of the paint depict the first siege of Constantinople, as well as the biblical story of The Prodigal Son, but definitely keep your eye out for the image of Satan disguised as a woman too. See pictures here.

This stunning monastery also has scenes of the first siege of Constantinople and The Last Judgement, painted in gold and blue. Make sure you don't miss the image of Mary with the young Jesus seated in her lap, and the illustrations of Christ's genealogy, as recorded in the Bible.

With its defensive walls and high turrets, the monastery is the one most like a fortress. Our favorite masterpiece found here depicts The Ladder to Paradise, where you can see detailed images of people receiving heavenly crowns from angels as they ascend the ladder, while demons are trying to pull them from it. You can also visit the museum here that houses many historical objects. See pictures here.

This church is the only monastery in this area without bell towers, but was painted to honor a noble soldier, Luca Arbore, who was beheaded along with his two nephews for suspected treason. The exterior is primarily blue and green, with images of Adam, Eve, and St. Christopher carrying a young Jesus on his shoulders. See pictures here.

This mostly-white structure once served as the church for a nuns' monastery, but now is the only building that remains of the original complex. The most famous image here shows Micheal the Archangel and Emperor Constantine as they have a conversation in front of several saints. See pictures here.

Take The Bus To Suceava

Suceava is the best starting point if you want to see these monasteries in person.  It's one of the largest cities in the northeastern corner of Romania, so you'll find bus routes that come here frequently. From Iasi, the bus ride is less than 3 hours and costs around 35 lei (about $8 USD). Check the timetable and book your ticket here! 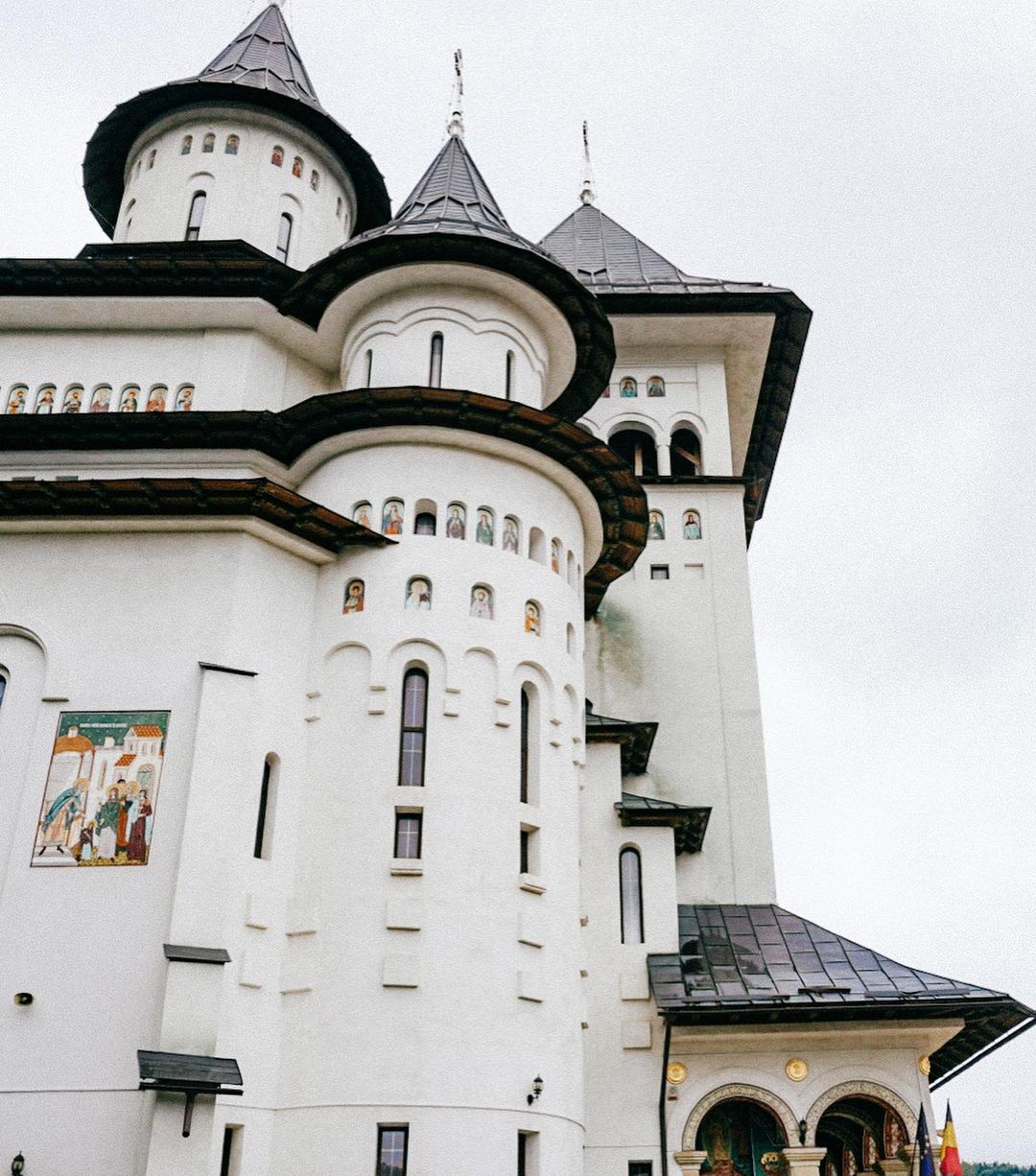 Getting To The Monasteries

Getting to the monasteries can be tricky depending on which ones you'd like to visit. Some of the monasteries have 25 miles between them. The easiest and most convenient option is to take a tour that picks you up in Suceava and will take you around to the most famous monasteries. This of course makes transportation a lot easier but you will have to follow their schedule. Here are three tour companies with good reviews, but you can definitely find more in Suceava (especially if you're staying at a hostel).

This guided tour with Sorin Fodor can be customized to what your group wants to do. For example, if you only have one free day, they'll take you to the four most popular monasteries. If you have two days, they can take you to several other locations. And as a bonus, they can pick you up from any place in Romania, making it so you don't have to figure out the public bus. Just email the company for a price quote.

This 8-hour tour starts at 39 euros when you have at least 3 people in your group. The guide will take you to see four of the monasteries, plus a pottery workshop. The price of the tour does not include the entrance fees for the monasteries, which are usually about 5 lei each (about $1.50), so make sure you have cash for that. You can also customize the tour to include places like the International Museum of the Painted Eggs or the Cacica Salt Mine.

This tour is very similar to the one above, also lasting 8 hours with stops at 4 monasteries. It is 40 euros when you have at least 3 people in your group, and doesn't specify whether or not the price covers entrance fees, so we recommend bringing enough lei for that just in case. 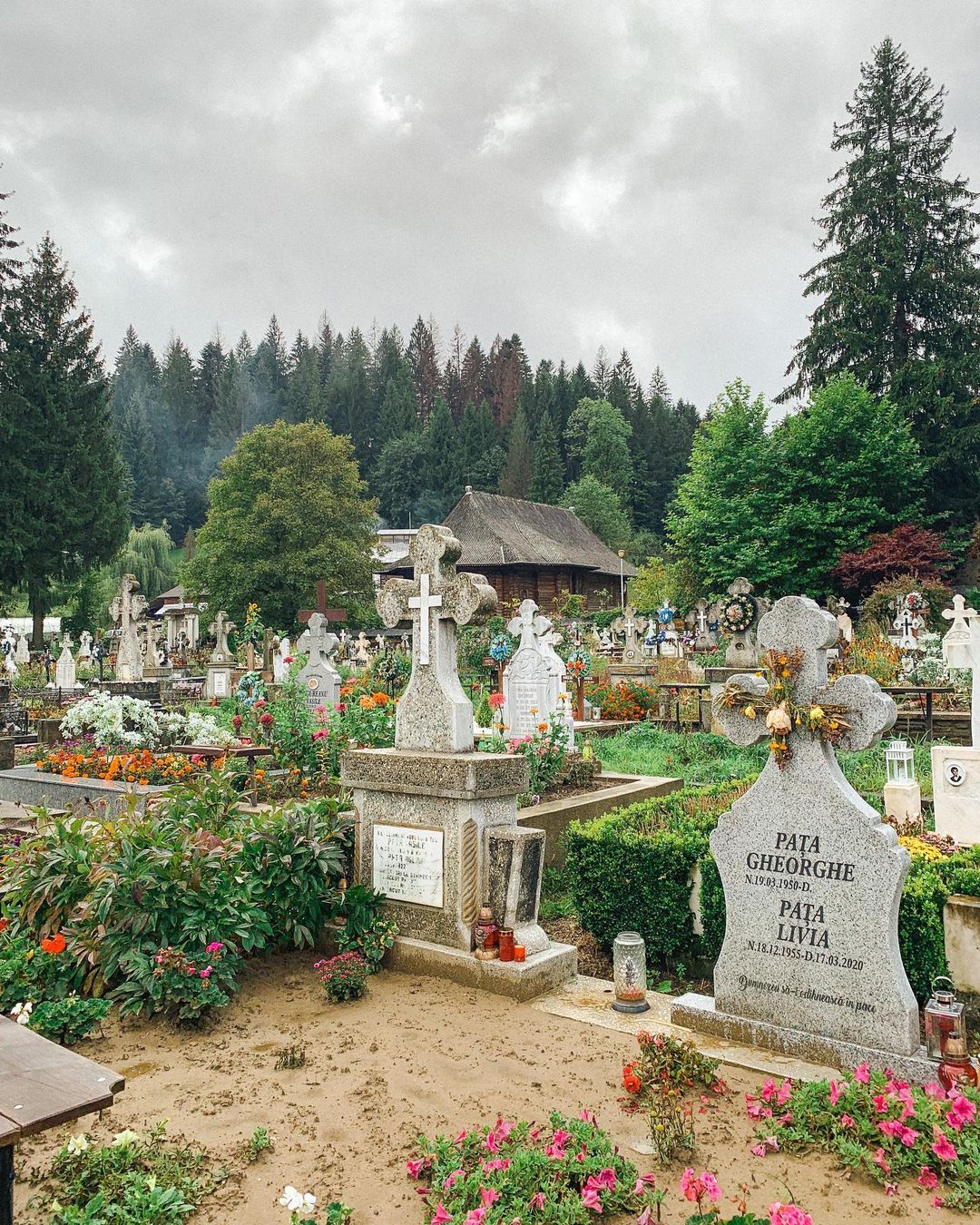 Since this will probably need to be a weekend trip, you're going to want to spend the night in Suceava. If you're coming from somewhere north like Iasi, even if you're just visiting a few monasteries in an 8-hour tour, you just need more time. When trying to decide whether to stay in an AirBnb or a hostel, here are some differences to consider.

Although Lary Hostel is the only one listed in Suceava, and is a couple of miles outside of the town center, it is still a great place to stay if you prefer hostels! Beds will cost you about $25 dollars each per night. They can organize a tour for you of the monasteries if you ask, and you can also try traditional Romanian food at their cafe.

There are quite a few  beautiful AirBnbs spread all along the route to the monasteries near Suceava. Staying really close to Suceava is probably easiest if you are taking public transportation there and then trying to catch a tour, but don't you just want to stay in this cutie hammock cottage?  Or in this charming rustic cottage? AirBnbs are often cheaper than hostels because you can split the cost between everyone in your group!

There are so many stunning spots in Romania, and these two are just a short drive away from the painted monasteries. If you're planning a long weekend trip, include one or both of these places in your itinerary!

If you like fortresses, and scenic mountain landscapes, and of course monasteries (there's even an ancient library with 18,000 books), then you need to hurry on over to Neamt! It's the perfect day trip for our volunteers. Check out all there is to do in Neamt.

If you've seen the painted monasteries, why not go see the equally stunning and unique fairytale churches in Maramures, Romania. Spend some time hanging out in the surrounding villages and see what everyday life is like there. Our volunteers say the elaborate headstones at the Merry Cemetary make this place another highlight of the region. 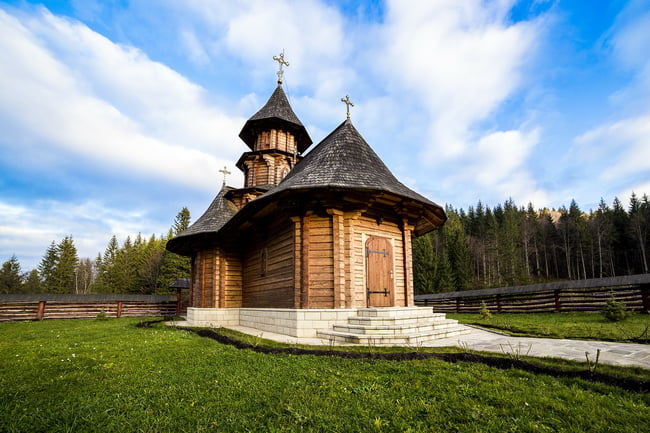 Have some questions about ILP you want answered before you can decide whether or not you want to volunteer in Romania?

If you get to spend a semester in Romania, you will not only make a difference in the lives of the children at the orphanage, but will also have time to explore Romania and other dreamy European destinations! Click the button below to learn more about some of our applicants' most frequently asked questions: