Cholula Is The Can't Miss Spot If You're Hanging Out In Puebla, Mexico 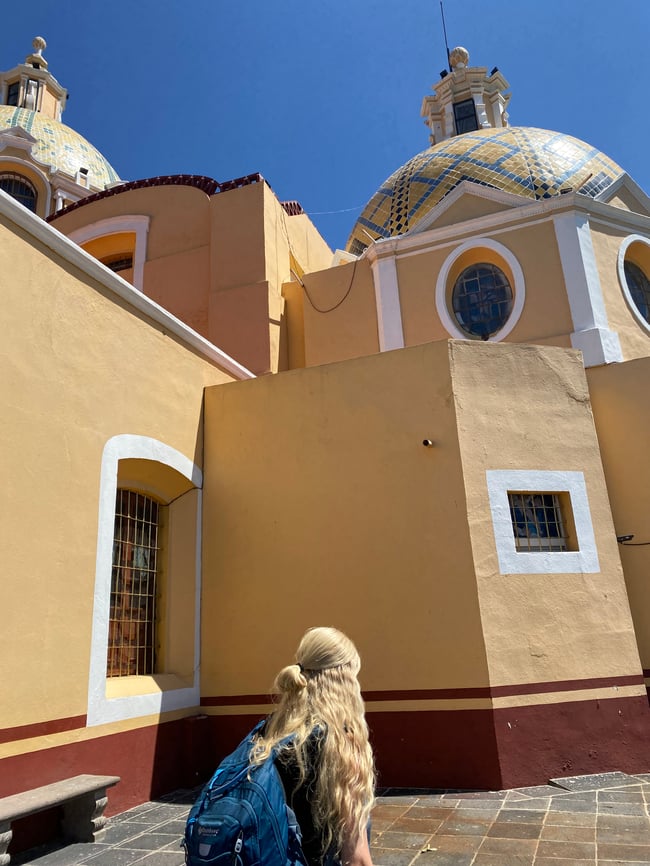 Spending time in the colorful city of Puebla? You would be missing out on half the highlights found in this part of Mexico if you didn't also visit nearby Cholula!

We love Puebla — maybe it's the colorful streets, towering cathedrals, tons to do, and some of the best food in a country, but we are hooked. While you can start to hit all the highlights in Puebla in a few days, you'd really be missing out if you didn't visit the nearby city of Cholula while you're there.

Cholula is just a quick taxi (or free tourist train ride) from the city center of Puebla. Once you make the jump over, you'll experience an excavated pyramid, secret tunnels beneath the pyramid, hilltop churches, and much more. Another highlight? All our favorite things to do here are either free or just a couple of dollars, making Cholula another budget-friendly addition to your Mexico itinerary.

Cholula must-do day trip especially since we have all the details below.

A Bit Of Background Info

When you're searching for things to do in Puebla, you'll most likely bump into activities that aren't technically found in Puebla but are located in nearby Cholula. Cholula is a separate town about 10 miles from Puebla and holds more than just historical significance and popular tourist attractions. It is one of the country's most historically important cities (it's also considered a "Magic City") while also boasting the world's largest pyramid, along with dozens of churches plus a colorful zocalo. The pyramid is really the main attraction here, which you can read all about below. It's a "don't miss" stop!

In short, this is a day trip that's kind of integral to Puebla — seeing one without the other would give you a half experience, which is why we recommend budgeting enough time to visit both thoroughly. We have all the details about your trip to Cholula below, but you can find your city guide to Puebla here. 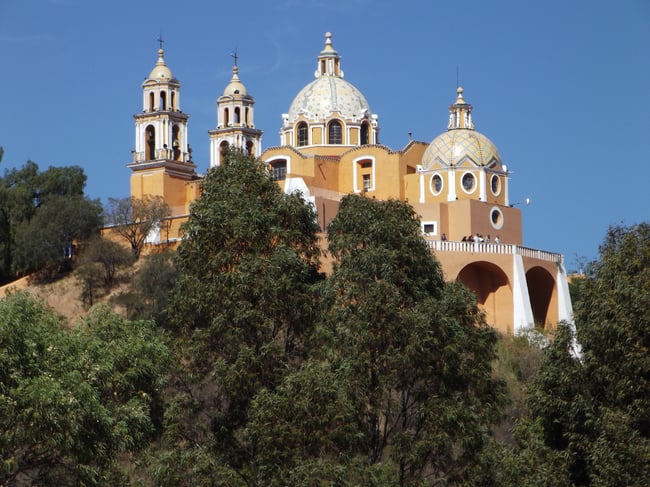 All About The Pyramid

The pyramid is one of the main attractions to Cholula, and for good reason. It's a massive, partially excavated archaeological site complete with tunnels to climb through and museums to explore. Technically known as Tlachihualtepetl, this pyramid holds the title of the world's largest pyramid if you're measuring by the base. Tlachihualtepetl has a base of 450 meters per side (more than 1,450 feet). By contrast, the Great Pyramid at Giza measures in at 230 meters (around 175 meters) ... roughly half the size!

A Little Bit Of History

The pyramid's history begins with religious and mythical roots, spanning at least a thousand years before the Spanish Conquest of the area. Researchers believe construction occurred in phases, which first started way back in the 3rd century BC. It's believed later sections were built and dedicated to the god Quetzalcoatl — a deity associated with the wind, sun, and air, while some believe earlier sacrifices and constructions were dedicated to Tlaloc, the god of rain.

At its peak, the city of Cholula was believed to be home to the country's second-largest population, around 100,000 people. Tlachihualtepetl served as an important point in the city, even after the original inhabitants fled; hundreds of people were buried here, with signs that the burials had religious and magically spiritual significance. Around 1100 1200 AD, Cholula was occupied by the Toltecs, and the pyramid was abandoned and largely covered (maybe intentionally, maybe accidentally). By the time the Aztecs took over and the Spanish invaded, the pyramid looked like nothing but a grassy hill. Excavation began in 1931.

To help you orient yourself, the pyramid area is a huge space that includes the orangey/yellow church that you see in just about every photo of Cholula — the top section of the pyramid won't likely ever be excavated because of that colonial church — only a portion of the massive pyramid is currently exposed. You'll still see grassy hills that contain portions of the massive structure.

This place is huge, with tons to see. Visiting the pyramid usually consists of three parts: the temple complex on the south side, a network of tunnels (800 meters of the 8km dug by archaeologists are available to the public), and the site museum. The most notable sites to explore are the Mural of the Drinkers, the Courtyard of the Altars, and wandering around the huge space.

To reach the tunnels, find the entrance on the opposite side of the ruins (the north side). The tunnels lead you underground through the center of the pyramid, giving you a peek at one of the staircases of the pyramid. You'll exit on the south side. Entrance to the tunnels is included with your ticket price and takes about 15 minutes to walk through. As a heads up, this isn't an activity for those who are claustrophobic: the tunnels are narrow, dark, and you will have groups of people ahead and behind you. You're free to walk through on your own, or there are guides you can hire.

The museum (the Museum of the Pyramid of Cholula) is found across the street from the tunnel entrance. It's also included in your ticket and is where you can find some pottery recovered from the sites, as well as a model depicting the pyramid's full scope to help you visualize what the space used to look like. It's a small museum, but interesting to see.

If you're starting at the church, you can reach the ruins via the hilltop church (explained below). When you exit the church, you'll go back down the set of stairs, but only about halfway. You'll reach an open field with a pathway that runs down to the entrance of the ruins, on your right. 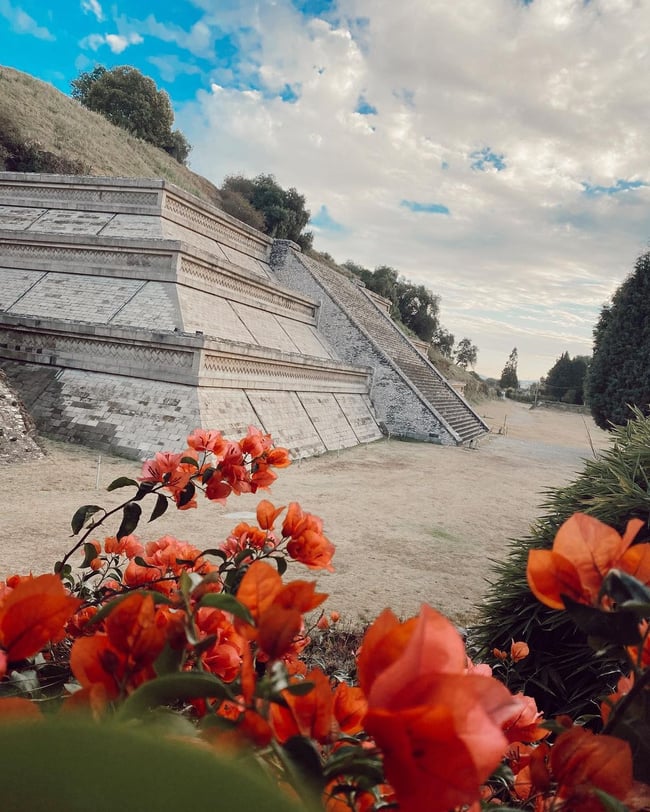 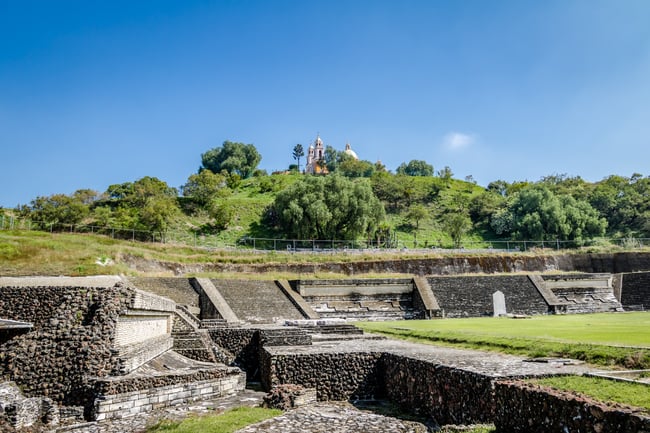 See The Other Highlights In Cholula

This colonial-era church actually sits on top of the pyramid which is kind of hard to believe just from looking at it! The church and the grounds make up the archeological site (and you can easily travel between the two). Nuestra Señora de los Remedios also offers one of the best views of the city. You're fairly high elevation-wise at this point, so that alone can make the hike a bit strenuous. Just take it easy on the way up if you need to.

Once you reach the top, make sure to spend some time inside (the interior is stunning) while also admiring the exterior of the church's dome, where yellow and blue tiles create a geometric mosaic.

Some recommend visiting in the morning when you can get clearer views of sites like the Popo Volcano (which sometimes puffs out smoke), Izta, and Cerro Zapotecas. It's also a cooler point in the day to be making the climb. 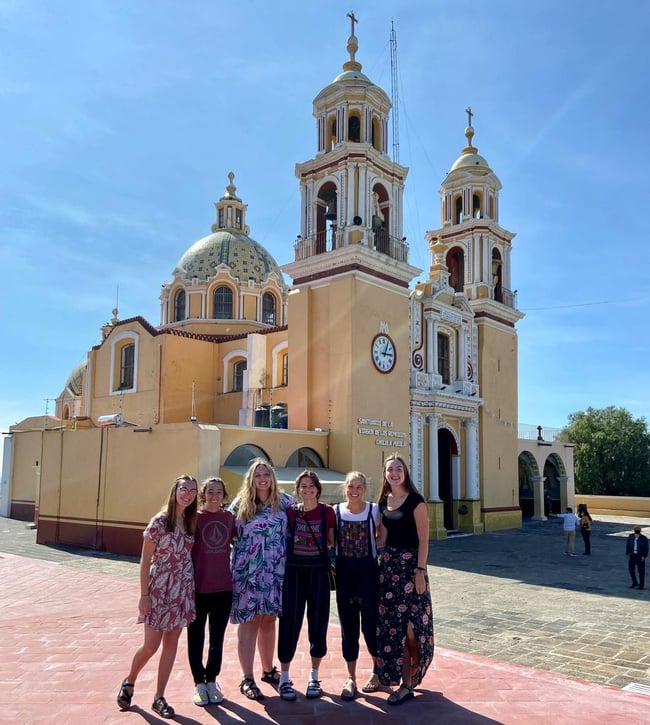 In the mood for another museum? The Museo Regional de Cholula is found at the base of the pyramid (it's not included in your ticket, but it's worth a visit). Inside, find a fascinating collection of rooms featuring artifacts from the history and culture of the region and country. Among other artifacts, find colorful statues depicting deities, printed tiles with different interpretations of the eagle through the decades, and more.

Another cost-free addition to your visit here is a trip to the Francisco Palaez Roldan Ethnobotanical Botanical Garden. The space is home to grassy pathways, sculptures, cacti, flowering plants, shady trees, as well as a small cafe and gift shop selling natural products. It's a relaxing way to spend part of your afternoon.

Time In The Zocalo

Like many colorful Mexican cities, the zocalo (main city square) is the place to be, with a string of cafes, little stores, and restaurants, as well as some people watching. Plan some time to visit the Franciscan Convent of San Gabrial while you're here, which is found right next to Cholula's zocalo. The convent was built way back in 1549, making it one of the oldest in Mexico.

We're also fans of snagging some ice cream in the city square to help you cool off. You'll find others, but Cuore Italiano is a recommended spot, just outside of the zocalo. Here's their address: Av. 6 Ote. 6, Centro, 72760 Centro, Pue., Mexico 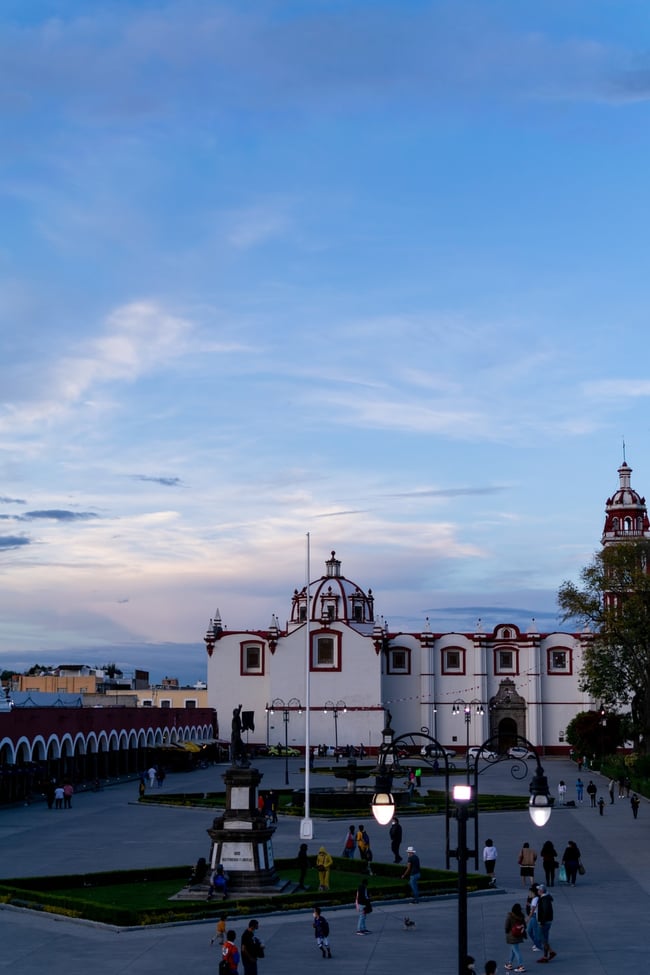 If you're planning on visiting the pyramid (a given, right?) you'll want to dress and pack with this in mind: the majority of your day will be in the sun. This part of Mexico is rather warm and sunny, even in the winter months. Plan on having a hat, sunscreen, and plenty of water to help you stay hydrated and cooler as you hike up to the church and explore the pyramids.

How Long Should I Stay?

Visiting Cholula is a pretty packed day — some visitors stay overnight but most visit for the day from nearby Puebla. Typically, ILP volunteers are here for the weekend or a bit longer, so spending at least one full day in Puebla (two if you have the time) combined with a day in Cholula is the minimum of what visitors recommend. It makes for a very fun three-day adventure.

Pack pesos for the shops, vendors, and other activities surrounding the pyramid. Some visitors mention that the shopping here was one of the best spots to get some souvenirs. There's an area behind the pyramid that fills with vendors selling plenty of art and crafts, souvenirs to take home for you (and family and friends), as well as homemade sweets and other snacks. 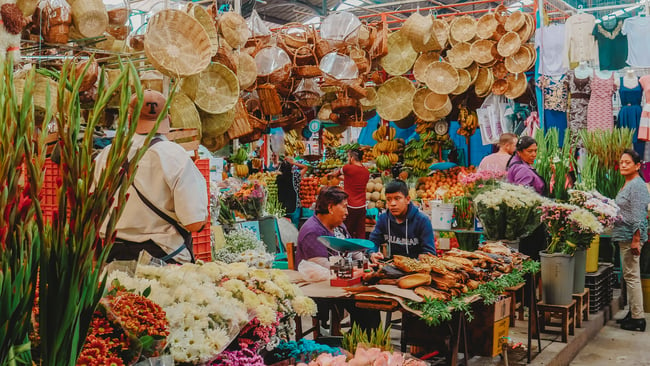 Getting Here From Puebla

The easiest jumping off point is from Puebla, so make it there, then use the following info to get to Cholula.

You can take a free tourist train right into the heart of the Puebla to get to Cholula. Get the schedule here. Just note that some find the times rather infrequent and not exactly convenient as to when they'd like to travel in between the cities ... but having free transportation is a very nice perk if you're on a budget. The train ride is about 40 minutes.

Catch the train in Puebla at 11 Norte esq. 18 Poniente, and it'll drop you off at Avenue Morelos and corner 6 Norte in Cholula. Where you are dropped off is right across from Calle 6 Sur which connects to the archaeological site.

Splitting an Uber is also a cost-effective way to get to the pyramids/Cholula without needing to adhere to a schedule. Reports mention that an Uber from central Puebla costs about 100 pesos and is a 20-25 minute drive. 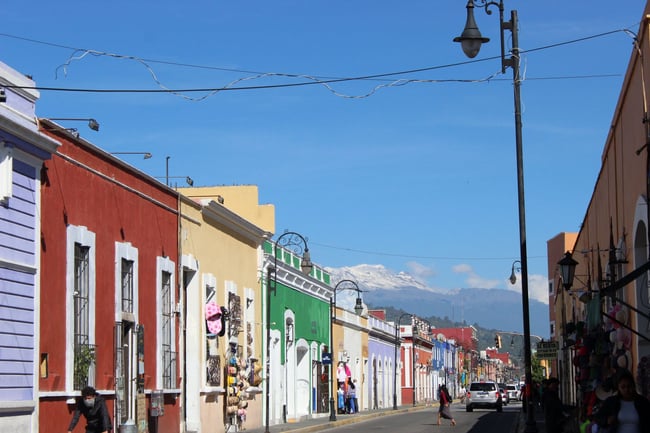 Don't just travel in Mexico ... do more by volunteering here!

You won't get the full experience during a quick tourist visit like you would if you were to volunteer in Mexico. Not only will you get to tackle all of our favorite adventures, but you'll also get to experience the country's rich culture, make friends with the locals, and have this country feel like home — way more than you could ever get out of a short visit.