Traveling By Bus In Nicaragua

While you’re volunteering in Central America for a semester or just traveling around, you’ll probably be taking a lot on buses. Here’s your go-to-guide about doing just that.

Our ILP volunteers living in Nicaragua will be able to see a lot on their weekends off and vacation days — places like the country’s own “Grand Canyon” or the chance to sled down the side of volcano (it’s super rad). And you’ll probably use buses to get there.

Thinking you're ready for a semester here?
Volunteering in Nicaragua

We have a guide about traveling in Nicaragua right here, but right now, we’re here to talk all about buses.

All About Taking The Bus In Nicaragua

What Kind Of Buses Are There?

Chicken buses are actually decommissioned school buses that have been repainted and refurbished to use to get locals all around Nicaragua. They are very inexpensive to take and don’t really have regular schedules; sometimes the drivers will let people off wherever they ask, which can make the schedule and timing a little unpredictable.

There isn't a set bus schedule or station, you kind of just have to figure out where they pick people up and drop them off. As an ILP volunteer, you're set up with a Local Coordinator and put in contact with locals who may be able to point you in the right direction. Or you can get to know your neighborhood and figure out the basic pattern of the chicken buses in your area.

Basically know this about chicken buses: The buses typically leave when full and leave by word of mouth, instead of following a schedule. Sometimes buses come every 15 minutes or sometimes once every hour but sometimes they don't come at all. You'll need to pretty flexible when taking the buses in Nica. 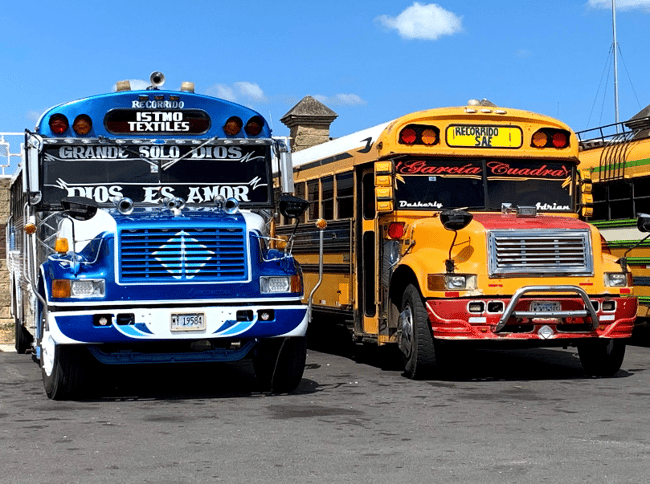 Microbuses are similar to Chicken Buses but don’t make as many stops. They are also recycled school buses.  Both of these types of buses leave once the bus is full, making their schedule a little unpredictable. However, you can typically find a little paper schedule taped on the inside of the bus.

If you don’t want to rely on public transportation you can hire a shuttle to take you from city to city, though this will be more expensive (Tierra Tours is a popular tour and transportation service).

You can also get to other countries via bus rather than flying. For that, you’ll be better set taking a shuttle to Costa Rica, rather than a bunch of connecting Chicken Buses. Check out Tica Bus, TransNica, Nicabus/Platinum and Central Line for international trips out of and into Nicaragua.

Just to give you an idea on timing and prices, a Tica Bus from Nicaragua to San Jose, Costa Rica costs around $50 and takes 8-9 hours.

Don't forget to check out the museums in San Jose before you jet off to explore the rest of Costa Rica.

Because you’ll be riding on a school bus (if you’re riding a Chicken Bus), note that there won’t be air conditioning and that there isn’t a lot of room for storage. Chicken Buses will usually charge you a price to get on, then another “ticket” for you bag because you can’t put them anywhere than on another seat. They can also get pretty crowded, so getting to the station or chicken bus stop early can help you get a seat near the window instead of standing in the aisle.

If you take a minibus or shuttle, those are a bit nicer with cushioned seats that may or may not recline and usually have air conditioning. Since you’ll be riding these for longer distances, they usually include rest stops to get food or for a restroom. 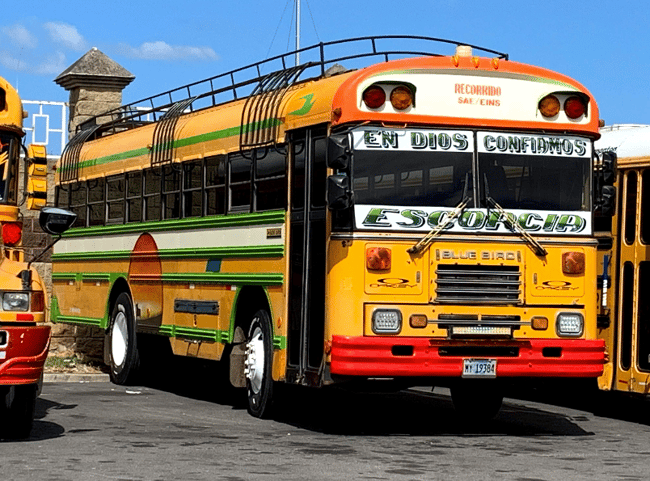 What Are The Bus Schedules?

This is tricky in Nicaragua; there aren’t very many online schedules to look at, so it’s always best to see what you can find online and then double-check in person. One volunteer said there really isn't a bus schedule and even confused some of the local most of the time. There is one site, however, that’s pretty helpful.

CentroCoasting pulls up a list of the major cities in Nicaragua in a grid; You pick your starting city (like Granada) and click on that tile to pull up what buses go where from Granada. So if you’re headed to Granada to Ometepe, you’ll click on Granada and scroll down until you see your route. The site lets you know that you’ll need to take a bus to Rivas then onto Ometepe, giving instructions on how to do that. That site provides a Google map of where the stations are which is also helpful.

To take a minibus, you can also look online: Tierra Tours is a widely-known tour and transportation service that may be able to help you out.

You can also see the shuttle bus schedules by visiting their respective websites. Tica Bus, TransNica, Nicabus/Platinum and Central Line.

How Do I Book Tickets?

These are best done in person, at the specific bus station. Since Chicken Buses and Microbuses tend to leave when they are full, if you get to the station early, you should be able to get a seat.

If you’ll be taking a shuttle into another country, you can book these online in advance. 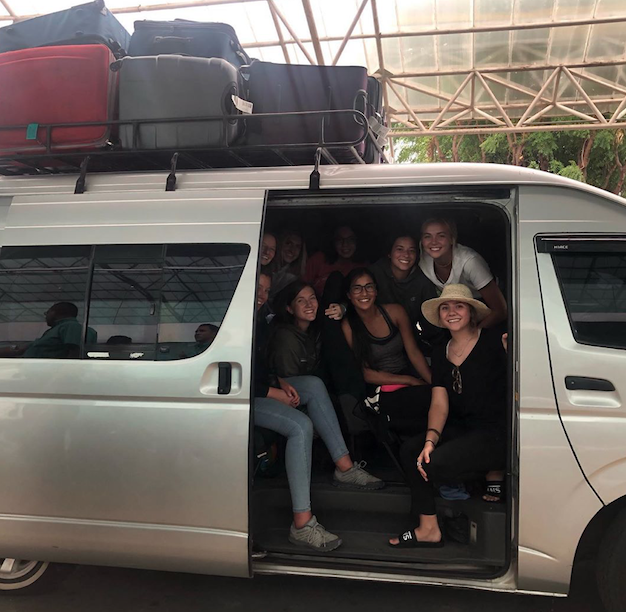 How Much Do Buses Cost?

Chicken Buses and Microbuses are very inexpensive, we’re talking around $1 (slightly more, slightly less) depending on the distance, but usually never more than $5-7. For example, to get to Granada to Rivas (where you can get to the island of Ometepe), taking a microbus or chicken bus will cost around $2.00 USD for a 2.5 hour drive. But if you took a shuttle or minibus there, you’d pay around $25 to $30 for the same ride.

Inside Nicaragua, expect to pay anywhere from $20-$50 USD or so for a mini bus or shuttle somewhere. For longer trips (to other countries), plan on paying $180-$250 or more. It may be easier to fly, so be sure to check flights if time is factor; A flight might be the same price, but will get you there 8 hours earlier.

Where Is The Bus Terminal in Granada?

There isn’t a central terminal in this city, so you’ll need to figure out where you want to go and how, which will tell you which terminal to go to. Again, CentroCoasting comes to the rescue:

On the Granada page, if you click on the red pins on their map, a little pop-up will tell you some info about that station. For example, the"Terminal de Buses Granada - Managua (UCA)" is the bus you'll take to Managua (the first stop on your bus ride to Leon — where you can go volcano boarding!)

You Should Also Know About Rivas

There’s not really much to see in the southern city of Rivas, but it’s such a big transportation hub that you’ll need to stop through on almost every bus adventure in Nica. This post about Rivas is a quick overview, giving you a gist about what the bus station is like, popular routes that’ll take you here, and a few adventures nearby.

You know when you’re planning a trip and you see that you have a bus stations in a new city and you’re wondering if there’s anything cool to do there or if you should just make your transfer and go on your way? That’s what this post does for you.

Now you're set to go all over this country via bus — score.

That means you're pretty much ready for all those amazing vacations hiding in this country. Whether you want white-water rafting, hikes through dense jungles or dreamy beaches, Nicaragua has you covered.