Fresco painted churches, ornate towering belfrys, home to the Romanov family crypt, and maybe even relics from the crucifixion of Christ? Find all of this and more at the Novospassky Monastery.

I never got tired of the monasteries when I was living in Russia. One of my favorite things to do was to peek outside of my apartment window and see dozens of steeples lining the skyline ... then grabbing my ILP group and chasing down these churches to find the prettiest cathedrals in Moscow. One of the most iconic and famous monasteries in all of Moscow is the Novospassky Monastery — a huge complex that's home to hundreds of years of history. If you'll be spending a few days in this sprawling city, it's a must see.

Don't miss the highlights of this city
With so much to see and do, you'll want an insider's guide to exploring Moscow.

Because there is quite a lot to see while wandering around the Novospassky Monastery (and you won't want to miss a thing) this blog post is your pocket guide to exploring this place. We've pulled out the buildings to see, given you a bit of history so you can understand what you're seeing, plus all the logistics to getting here — handy, right?

This particular monastery is crammed full of a handful of Russia's most historical events. The Orthodox community consider Novospassky to be one of the oldest and earliest, founded in 1490 on the orders of Grand Prince Ivan III. It originally was found in a few locations like the Kremlin, then over to to Krutitsky Hill, then onto the bank of the Moscow river, where it is now (and where it got its name). Novospassky roughly translates to "located in a new place".

Since it's relocation, the monastery has undergone new additions (like stone walls and towers in the 17th century), and a few other purposes like housing  French troops in 1812, then barely surviving the 1917 revolution, where the space was used as a prison camp. Since then it's gone through extensive restoration.

The Romanovs And Novospassky Monastery

One of the most noteworthy historical elements here is the Romanov crypt, where the Romanov Boyarsthe ancestors are buried. You can find the final resting place of the Romanov emperors in St. Petersburg, but the grand princes and other relatives of the royal family can be found here in the family crypt. The crypt has undergone a restoration in 1990 after all of the graves were destroyed in the 1917 revolution.

The artwork found within the buildings of the monastery help illustrate some of the most impactful historical events.  The frescoes depict the history of Christianity in Russia on one wall, and on the other wall, the Romanov family tree (which goes back as far as the Viking Prince Rurik). 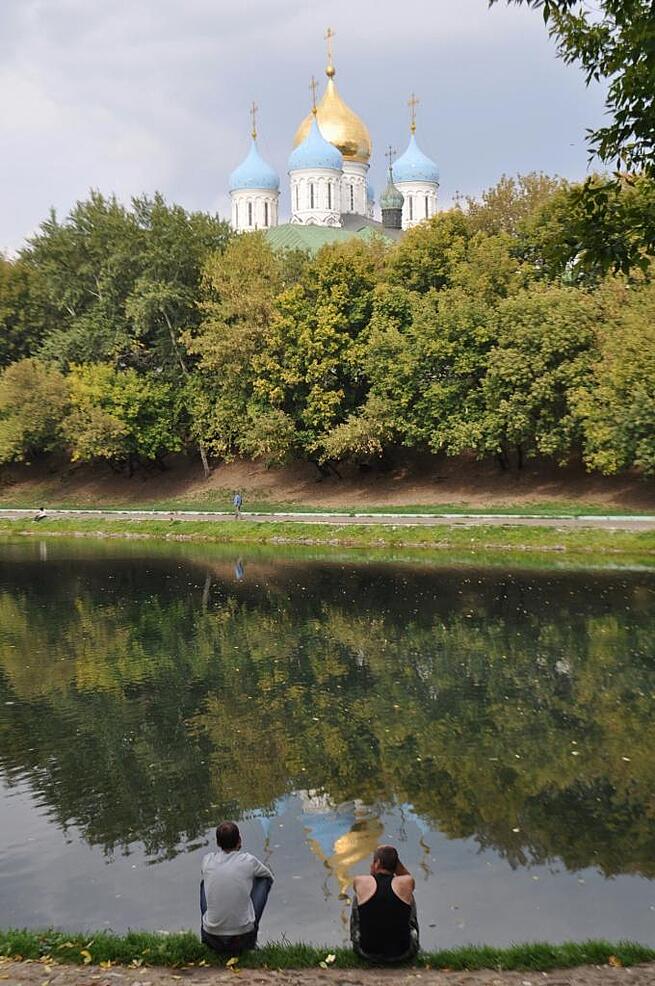 The monastery itself is a large complex of churches, belfries, and the grounds itself — meaning you'll probably want a bit of a guide on how to see it all.

Transfiguration of the Saviour Cathedral

If you've been to the Kremlin's Cathedral of the Assumption, you'll find a few similarities to the Transfiguration of the Saviour Cathedral. Notice classic onion-domed cathedrals and arched gables (and tiny vertical windows). It's the central structure to the monastery, and hard to miss. Inside, you'll find those gorgeous frescoes hinted at above, which outline the Romanov family tree to the Tsar's thrown in conjunction to the line of Christ. You'll also see images of ten ancient philosophers (like Plato, Aristotle, and Homer) which is quite unusual for an Orthodox Church, along with supposed relics like a fragment from Christ's robe a splinter from the cross he was crucified on, all kept in the reliquary.

If you want a bit of a teaser about what's waiting for you inside, that's best heard from Alexa, who visited on her semester: "We were able to go inside of the cathedral and let me just tell you, it was one of the most amazing things I’ve ever seen. The whole place was covered (literally everywhere you looked) in the most beautiful paintings of Christ and other saints."

The cathedral is connected to two churches, the Veil of the Virgin and the Church of the Sign, which served as the Sheremetev family's private tomb.

The area is also home to a cemetery, which traces an interesting history. There's a small chapel on the hill above over the single grave that remains — the rest were destroyed during the Soviet era. It's the grave of a nun named Dosifeya, who's better known as Princess Tarakanova. This princess claimed to the child of the Empress Elizabeth Petrovna and Alexei Razumovsky. The evidence of a child threatened the legitimacy of Catherine the Great, who supposedly ordered that the princess be abducted from her family and hidden away in the Peter and Paul Fortress in St. Petersburg.

There were rumors she passed away in the fortress, however, there's an account that she lived in Moscow's John the Baptist Convent from 1785 until 1810 where her remains were buried at the Novopassky monastery. A small chapel can be found to mark her grave, just left of the bell tower.

Another hard to miss icon of the Novopassky Monastery is the huge, canary-yellow bell tower.  It was built between 1759 and 1785 (replacing the earlier version built in 1622), and was constructed in stages. There was a financial boom previous to construction but the money ran out after the base and second tier were built. The tower remained unfinished for 17 years, before being completed in 1785. It's quite the tower, just about 9.8 feet lower than the huge bell tower of Ivan the Great in the Kremlin.

Find St. Sergius of Radonezh's Church inside of the bell tower. 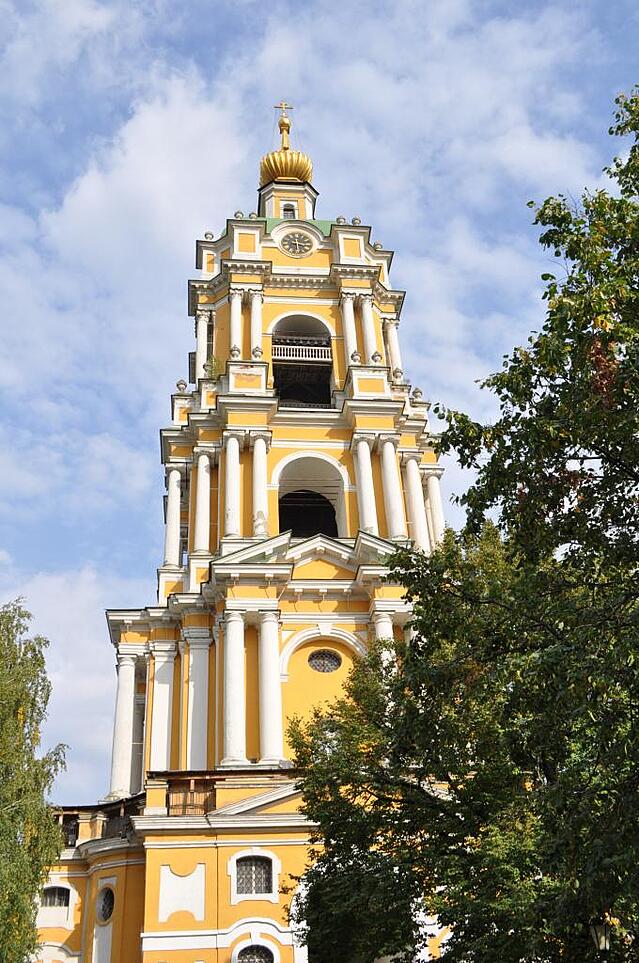 This is an active monastery, so all visitors are asked to be respectful with how they dress and act. Ladies, you'll need to be in a floor-length skirt or will need to borrow a wrap-around skirt to enter some of the churches if you're in pants. You will also need to wear a headscarf.

How To Get Here + Hours + A Little Tip

The address is Krestyanskaya Sq., 10, Moscow 115172, Russia if that's helpful to know. Best to use the Proletarskaya metro stop, using exit 5 and making the 10ish minute walk over to the monastery.

As far as things to buy, you can purchase blessed food and engraved rings (I love mine, it's easily one of my favorite souvenirs from Russia). 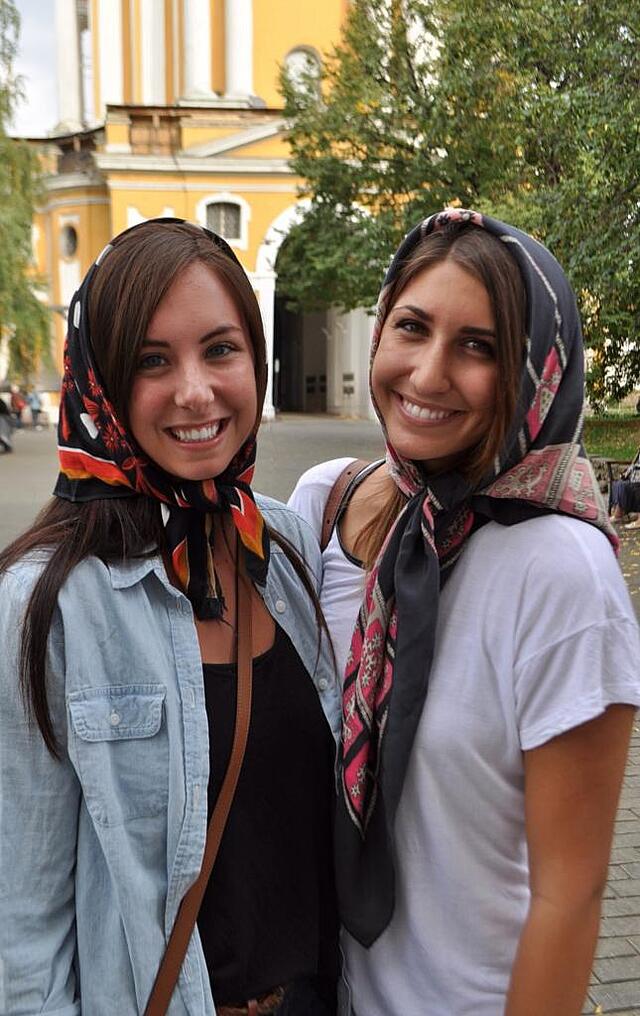 I absolutely loved volunteering in Russia for a semester!

Come see how you can do the same — living in Russia as a volunteer English teacher, with time to travel around Europe with a group of college-aged volunteers. You're only teaching part time, so you have plenty of free time to see Russia, weekends off for even more adventures, and vacation time to fill up your passport.