What To See (and How To See) Red Square 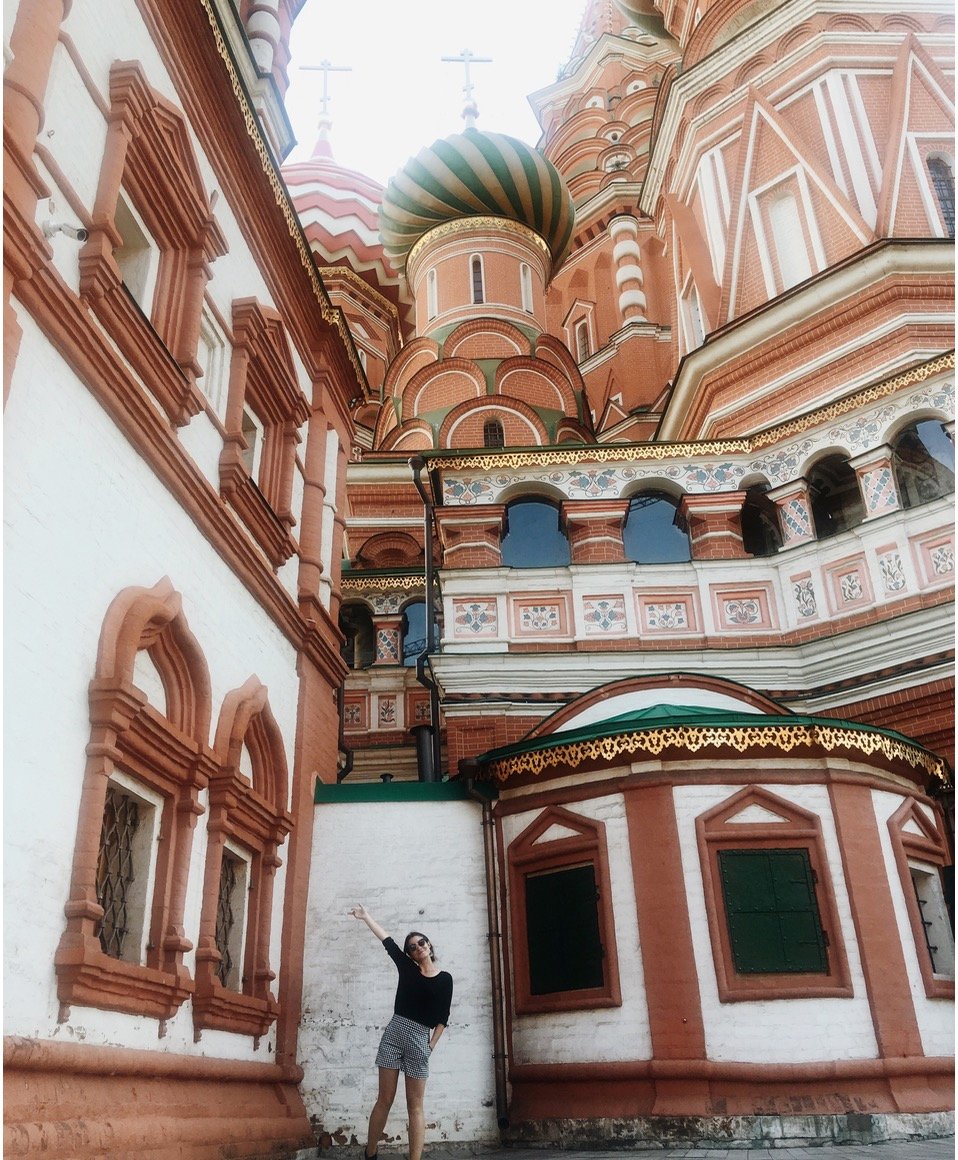 Red Square is why you come to Russia! With its rich history, magical atmosphere, and beautiful architecture, it is easy to see why so many people are traveling to Moscow and quickly falling in love. One walk around all there is to see in Red Square will have you wanting way more out of this country — you can easily spend an entire week just admiring all the historic and gorgeous buildings Moscow has to offer.

Need more on Moscow?
After living there, here's my go to guide for Moscow, Russia.

Because Moscow is on everyone's itinerary, and some may argue that Red Square is the quintessential spot in Moscow, it's something you absolutely cannot miss. Luckily, you have our guide to make sure you don't miss out on anything!

What Is Red Square?

It's basically a huge city square, one you'd find in pretty much any European city. This one's a big deal because it's home to some of Moscow's most famous buildings and historical events. Years and years ago, it was the main marketplace and hosted Moscow's biggest religious events. Later on in history, Red Square was home to impressive Soviet-Era military parades (and protests). You can spend a couple of hours reading its impressive history, but in a nutshell, that's Red Square.

Fun fact: Red Square gets it name (not from the red bricks) but because the Russian word for "beautiful" also means "red". The huge red wall of the Kremlin were actually whitewashed for a couple of hundred years!

How Do I Get Here?

The city's major streets all convene in Red Square, making it easy to find and get to: three different metro lines intersect at Red Square: The Red, Dark Blue and Green Line.  Depending on where you are in the city, it might be better to travel via a different line, so pick the best one for you. Download the Yandex Metro app and you can map out your route via the metro depending on your starting point.

We also have a whole guide about navigating the Moscow Metro which will come in handy if you need a bit more guidance.

Lots and lots and lots. This huge square is like an outdoor museum with some of the country's most impressive buildings to look at — some of Russia's most iconic buildings call the square home. Also good to know: you can go inside a couple of these which is nice if you want a  break from the cold in the winter or the heat in the summer.

To help orient yourself, we drew a little map of Red Square so you know where things are in relation to other buildings, but below is a list of all you'll find in Red Square, plus a little description of what that building is all about. 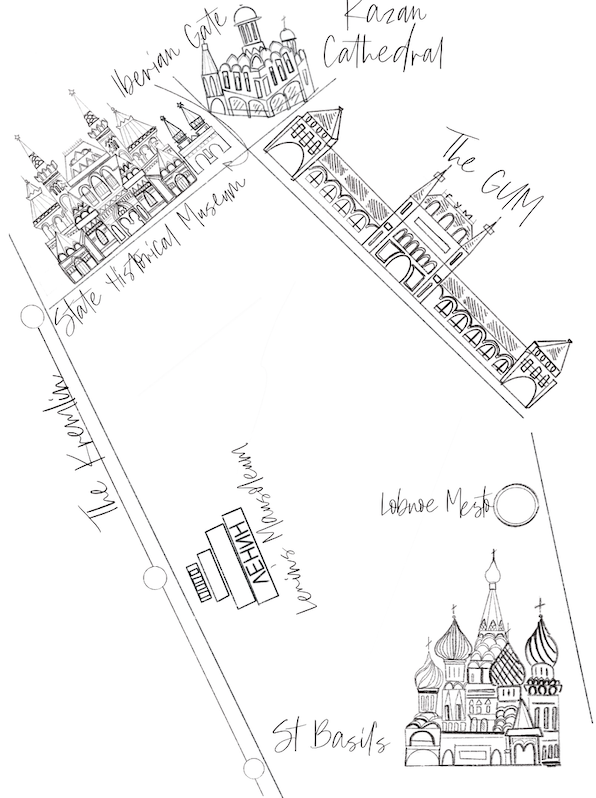 Located right in-between Red Square and Manege Square, this museum has a diverse collection that ranges from the prehistoric era through the Romanov era. The museum was first opened in 1894 to mark the coronation of Alexander III, and today is home to over five million items (!).The coin collection alone includes 1.7 million coins.  Russia is known for its many great museums and the State Historical Museum definitely lives up to this reputation.

Full price tickets are 300 Rubles, but there is a student price of 100 Rubles. Personal opinion: the museum is very interesting for those who want to see all of Russia's history, but my favorite museum that does that is the Armoury Museum. If you only have time for one, make it the Armoury Museum. 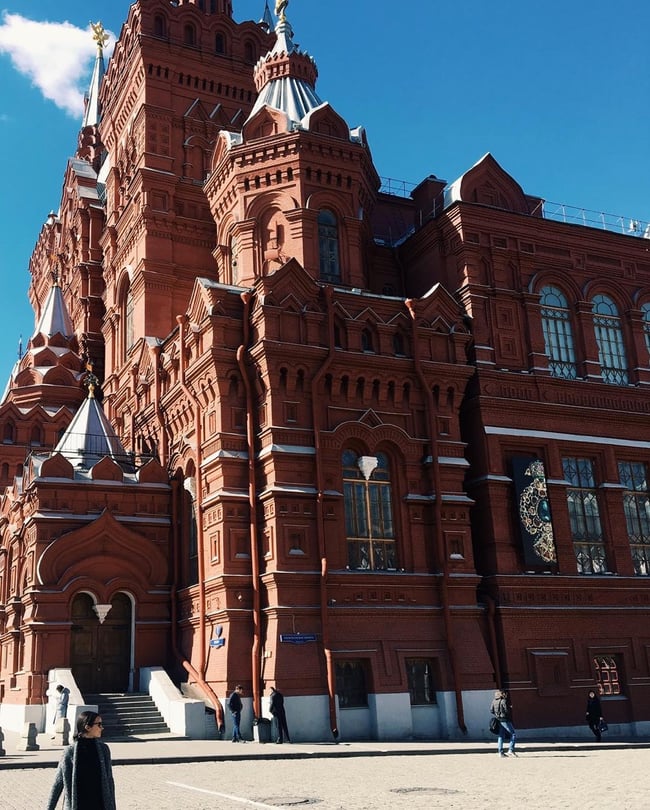 Also known as the Resurrection Gate, the Iberian Gate is the main entrance to Red Square. Built in 1535, this red-brick gate connects the north-western end of Red Square with Manege Square.

The gate is right next door to the State Hall Museum: you can see that dark red building to the right of the gate in the picture below. 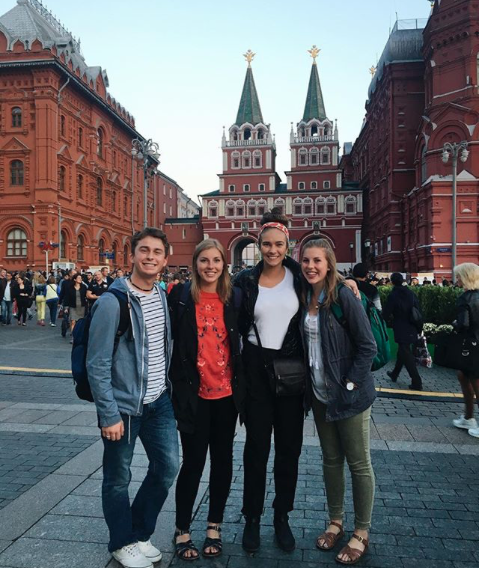 Starting at the Iberian Gate and working clockwise, you'll next run into Kazan Cathedral. Another charming must-see, this cathedral was originally built in the 17th century to commemorate the repulsion of Polish and Lithuanian invaders, and in honor of the Virgin of Kazan.

The Virgin of Kazan is one of Moscow's most revered icons, and is rumored to have supernatural abilities. The icon has been connected many times with protecting Russia from her enemies. This church was brought back to life as the first post-communist reconstruction project.

Pro tip: off to the right side, you'll find a teeny gift shop where you can get the prettiest rings, for around 200 Rubles. They're engraved in Russian which reads "God keep and save me". 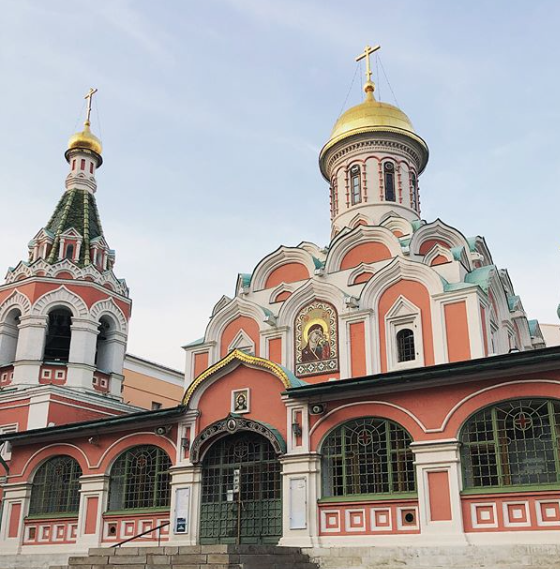 Glavny Universalny Magazin (or just GUM  — pronounced "GOOM") is a famous shopping center. Formerly, only high ranking officials were allowed to shop here, but today it is open for all to come and enjoy. The shopping center is well known for its exclusive stores that carry well-known western brand names.

Even if you're not into shopping at places like Louis Vuitton, Hugo Boss, Breguet, or Dior, stop in for a visit at one of the many cafes or just admire the architecture inside of this mall ... it's probably the fanciest mall you'll ever visit (plus there's an ice cream stand that sells 100 Ruble cones ... just saying). Around the holidays, this place really lights up (literally). Visit in the winter months and see one of the largest outdoor skating rinks set up in front of this impressive building. 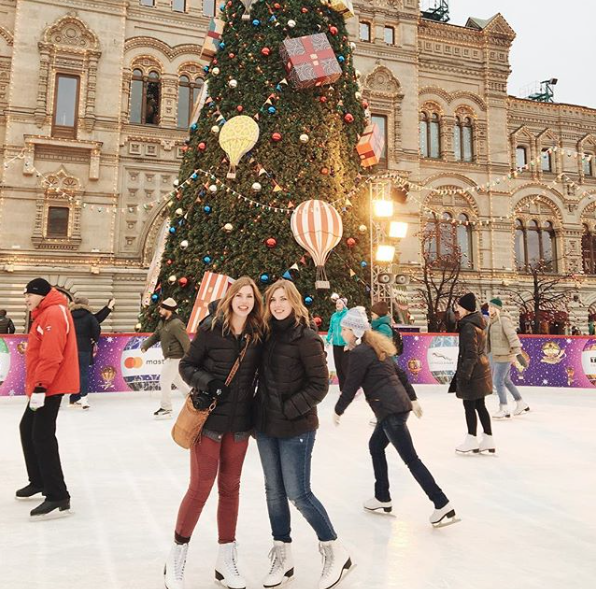 Next up (headed clockwise from the GUM) is Lobnoye Mesto. To really appreciate this spot (it doesn't look like much), you'll need to understand a touch of history. This circular stone platform was used for proclamations and was also traditionally the place where heirs to the throne were presented to the people for the first time on their 14th birthday.

Also known as the Place of Skulls, it has a pretty bloody history. Public executions were common and Ivan the Terrible gruesomely tortured many hostiles here. 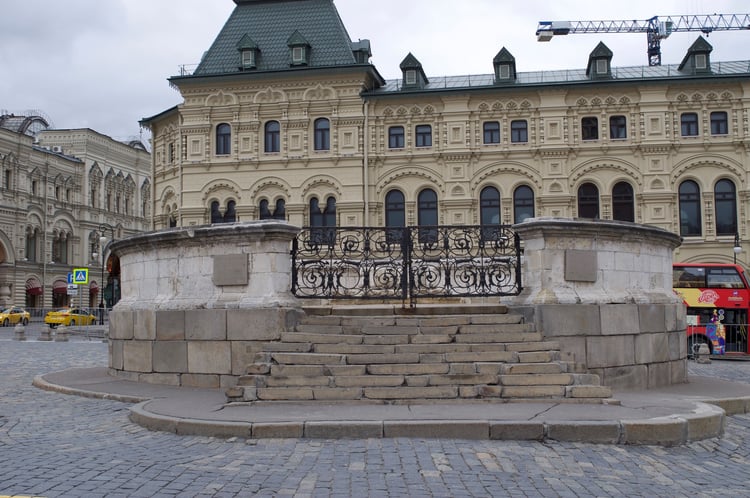 When most people think of Russia, they picture St. Basil's Cathedral. As Moscow's most famous building, it is definitely the top place to go when in Red Square and Moscow. It's officially known as the Cathedral of the Intercession of the Most Holy Theotokos on the Moat, but most just call it St. Basil's.

Ivan The Terrible ordered the construction of this cathedral in order to mark the capture of Kazan from Mongol forces — the cathedral was originally all white with gold domes. However in the late 1800s, the cathedral was remodeled and painted with the more complex and intricate design we all recognize.

The outside of this building is an icon, but inside is also worth seeing if you're interested in the history. They've preserved multiple layers, so you can explore little corners of all of the churches. If you didn't know, this church is actually home to nine churches, all connected in the same building (but each have their own multi-colored dome). Inside, you can tour the different church segments, see glittering icons, and other relics.

Hours: Depend on when you're visiting. Generally, it's open 10:00 AM to 7:00 PM, Monday - Sunday (Closed every Wednesday),but you can get specific times here.
Tickets: 500 Rubles (This is a must- see, don't skip out on seeing the interior!) You can also pay an additional 500 Ruble fee for a guided tour.

The official website advertises that students with an ISIC card get in for 150 Rubles, so keep that card handy! 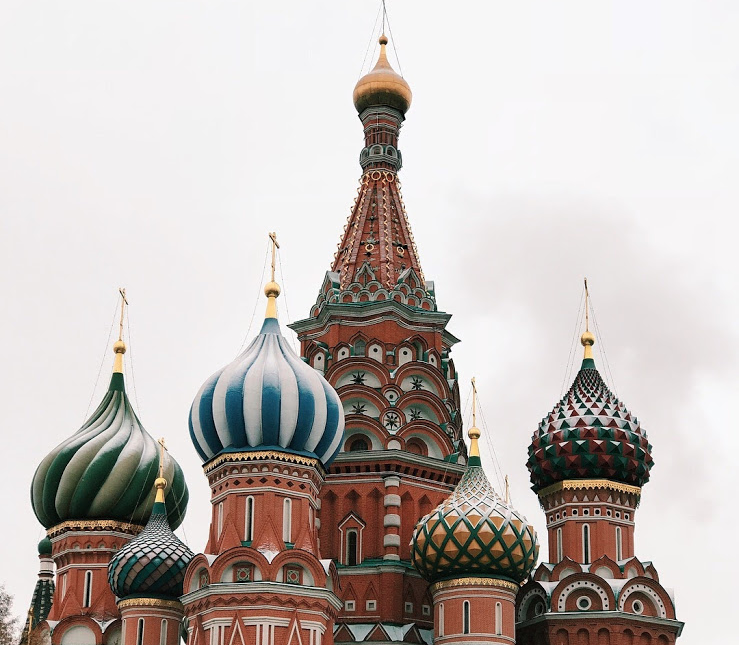 Statue of Minin and Pozharsky

Right in front of St. Basils Cathedral, you'll notice a sculpture that commemorates Prince Dmitry Pozharsky and the butcher Kuzma Minin who were leaders of the militia who repelled Polish invaders in 1612. Along the bottom, one base relief shows the people of Novogorod bringing their sons to be armed, and another shows the Polish fleeing from the Kremlin, being pursued by Russian troops.

As Russia's first monumental sculpture, it was originally located in the center of the Square, but was moved because it interfered with Stalin's plans for massed military parades. Actually, there used to be talks of removing (or demolishing) St. Basil's itself, because it also interfered with military parades. Luckily, that didn't end up happening. 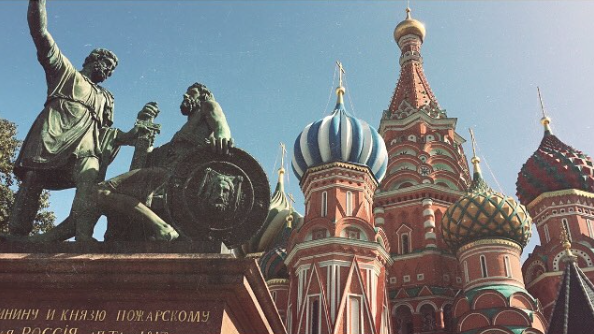 If you've heard rumors that they have a museum with Lenin's corpse available for all to see, I'm here to tell you that the rumors are true.  Across from the Gum, you can spot a line snaking out from a mausoleum, full of people waiting to see Lenin's body.

Although a little morbid, this is an experience you cannot miss when visiting Russia, Moscow and this historic square. Almost immediately after Vladimir Lenin's death in 1924, the Russian people decided that a simple burial would not be enough. So, in response to the thousands of telegrams received urging the regime to preserve Lenin’s memory for future generations, the government began the task of constructing a proper resting place for the former radical. They preserved Lenin's body and built this mausoleum to house his body.

Pro tip: There is usually a huge line that snakes around the square, so be prepared to get there very early to cut down your line time, or plan on waiting for a bit to get inside. Also, you'll be quickly ushered along once you do get inside. Guards ensure that the line moves quickly around Lenin's body, so don't plan to stop and stare. Photography inside is strictly prohibited.

Even though you only get to see Lenin's body for a few minutes, seeing this famous leader's embalmed body is still a must. 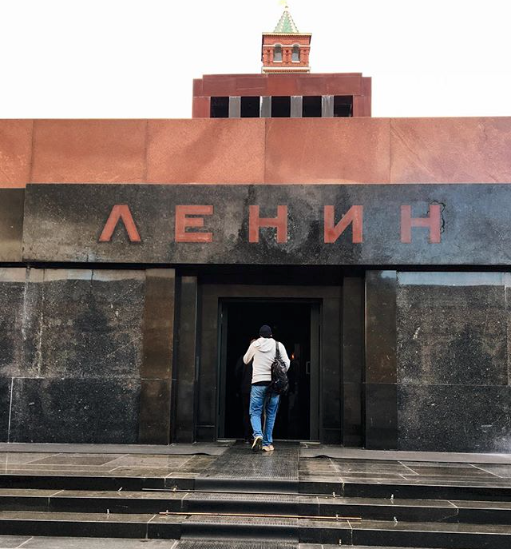 When Russia was under communist rule, Red Square came to serve as a cemetery. Originally, in 1917, two tombs were built under the Kremlin wall to hold the remains of 240 casualties from the October Revolution. However, it soon became a tradition to bury Soviet heroes by the Kremlin Wall and eventually in the wall itself. Pretty cool history, right?! Definitely don't miss this while exploring.

The Kremlin Wall has encircled the "center" and most important parts of Moscow for hundreds and hundreds of years. Now, it's an impressive red brick wall that has tilted towers, surrounding a handful of cathedrals, stately palaces, museums and currently, where the President of Russia lives.

To help orient yourself, Spasskaya Bashnya is right across from St. Basil's,  Lenin's Mausoleum is right under Sentskaya Bashnya, and you can see the Tomb of the Unknown Soldier right around the corner of the Uglovaya Arsenal'naya Bashnya tower, on the grounds of the Alexandrovsky Garden.

Here's a picture of the Kremlin wall on the opposite side of Red Square, bordering the Moscow River — and your guide to seeing the Kremlin if you want to go inside (which we think you should!) 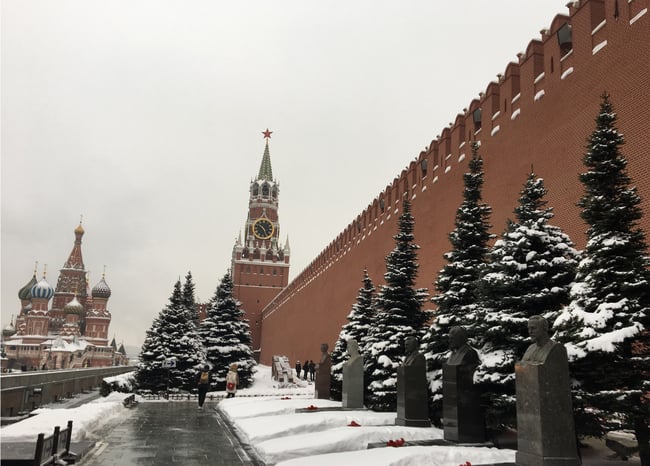 Need more Russia in your life?

Of course you do. We have tons to tips and info perfect for anyone visiting or volunteering in Russia right here (and if you click that button):